MSR is a Vietnam Veteran owned small business that offers many types of equipment for use at military facilities, including custom equipment for special armed services. MSR has provided equipment for many military bases in the United States, from California to the East Coast, and even overseas.

In addition to US military applications, MSR is proud to announce that we supplied equipment for the Canadian forces during the 2010 Winter Olympics. The Canadian forces utilized one of our small portable separators to treat the snow melt runoff from their vehicles, at a campsite near Whistler, so that the effluent could be directed to the river (a pristine salmon stream). The officer in charge reported that the Canadian government saved an estimated $50,000 by using our equipment, instead of capturing and trucking the runoff water to a treatment facility. The photo below shows the MSR-11 separator (left) used by the Canadian forces. This unit has since been superseded by the MSR-11 P separator (right), also shown below. 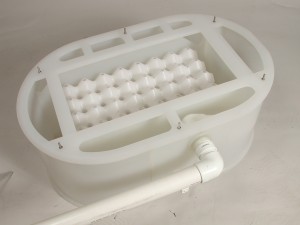