Many separation devices currently used in the oil production industry are similar or identical to those used a hundred years ago. The technology that was adequate for production at that time is no longer adequate either for environmental purposes or to recover the last amount of oil present in produced water that is to be injected through a saltwater disposal system. Many types of separation equipment including horizontal separators and gunbarrels are capable of removing most of the oil from the saltwater, but  are not efficient at removing the last traces of oil.

The residual oil in the water downstream of the old-style separators can be as much as 1% to 3%. This amount of oil, while not representing the bulk of the production, can still be of substantial value.

MSR can improve separation for:

This oil which is present in the saltwater, will also cause problems in the disposal well if it is allowed to be pumped down the well. The problems which can be caused are primarily plugging problems, firstly because of the oil itself, and secondly because of bacterial growth which can happen at the underground injection point.

It was therefore desired to have a more efficient design which would remove virtually all of the oil from the water, firstly for profitability and secondly for avoiding plugging and subsequent maintenance problems downhole.

Common separations systems used in the oilfield include gunbarrel separators and horizontal separators. The gunbarrel separator systems as illustrated below are simple gravity systems where the oil gas and water mixture comes to a preseparation system and the gas is supposed to separate out in the preseparation system and joined the gas which eventually separates out of the oil water mixture at the top of the gunbarrel. The oil and water mixture flows into the distributor near the bottom of the separator where the oil droplets are supposed to collect under the umbrella style distributor and weep upward into the oil layer water droplets are supposed to coalesce and come downward. Any water drops in trained in the rising oil will migrate into the oil layer above the water layer, and from there must fall back down through the oil layer to rejoin the water.

These systems are simple, easy to operate, and tolerant of solids but the flow pattern and lack of properly designed internals keeps them from being very efficient at removing smaller droplet sizes. This is because the design of the gunbarrel does not meet the laminar flow criteria for Stokes law to apply. 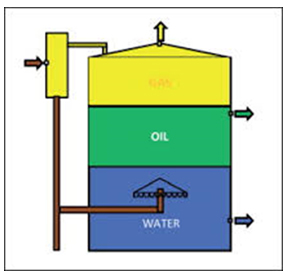 Another common separator design often used in the oilfield is a three-phase horizontal separator, as illustrated below. In this system the oil and water and gas mixture enters through the inlet nozzle near the top and the gas immediately disengages prior to the inlet deflector and proceeds along the top of the separator to the opposite and where there may or may not be a separate gas outlet. The gas may also be combined with the liquid in the outlet. A water layer is maintained below the oil layer as shown in the figure. 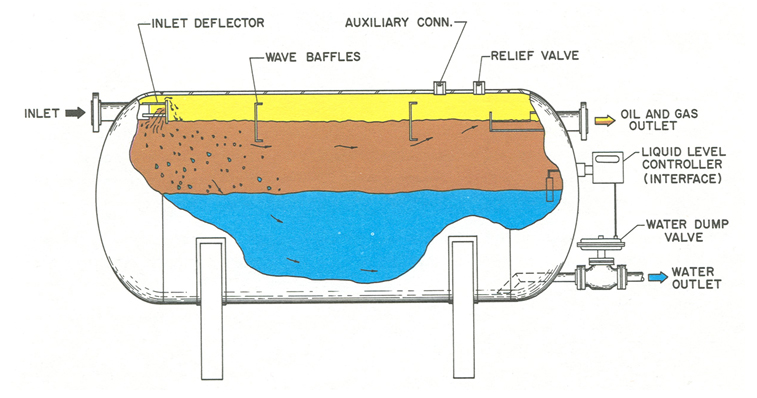 MSR has designed units for use up to 36,600 BPD, and can construct any size unit, small or large.  Please call or email MSR for information on how to improve separation of oil at your SWD facility and turn plugging problems into profits.